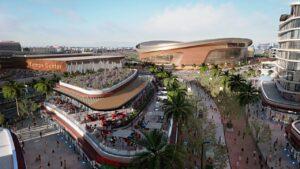 It is not news that the Arizona Coyotes time in Glendale didn’t work out as well as originally intended. However Glendale’s loss appears to be Tempe’s gain, not just in the temporary placement of the team there but in the spectacular infrastructure and entertainment options that are currently in the works in order to make the ‘Yotes a permanent part of Tempe life.

The centerpiece of this is the proposal for a $2.1 billion dollar sports and entertainment district on 46-acres of what is currently a city dump; it is the literal manifestation of the saying that one man’s trash is another man’s treasure. Included in this is 3.4 million square feet of new development at a projected value of $1.9 billion.

Nearly every reader is aware of the Westgate Entertainment Plaza and the promises for economic development that were to be produced from that development; while many of us have enjoyed Westgate on occasion, it is safe to say that Glendale didn’t reap sufficient rewards from it to make it worth it to try to hang on to the team. While heading across the Valley once a week for Cardinals games is not a huge imposition, doing the same for a Tuesday evening hockey game (and likely hitting rush hour traffic on the way there) is a very different proposition, and the performance of the entire entertainment ecosphere suffered as a result.

So how will this be different? Well the obvious answer is the most important word in real estate: location, location, location. With its location right on Tempe Town Lake, it is a short drive from downtown and east Phoenix, Scottsdale, and much of Mesa (along with obviously Tempe). This also means that as a general entertainment district, it is much more likely to fill up even when games aren’t going on, as now Tempe residents who are a little too old for Mill Ave. will have a new option, as will folks who feel like they have grown out of Old Town a bit. It is right in the middle of a larger (and often more affluent) population base, well positioning it for success even outside of gameday.

Another competitive advantage? Light rail. One of the biggest knocks on Westgate was the lack of a light rail route that went there; not only does light rail allow you to avoid traffic, but it helps take out the risk of over-imbibing and having to worry about driving back. However, light rail goes right near Tempe Town Lake, allowing revelers from Mesa to central (and soon, north) Phoenix to have a low risk way to party and pump money into the Tempe economy.

So cheers to Tempe, Glendale’s loss will almost certainly be Tempe’s massive gain, not just because of hockey but because of a potential entertainment superplex that just makes sense…a lot of sense. So long as it gets green-lit by the Tempe City Council (and they would be insane not to), this will be one of the biggest win-win-wins imaginable, and the team, the businesses that inhabit the complex, and the city’s coffers will be laughing all the way to the bank.