It’s where moms and dads teach their kids to play golf and seniors can find an affordable, accommodating place to enjoy the links.  It is the beloved Coronado Golf Course, a jewel in southern Scottsdale.
With its nine holes and driving range traversing the Indian Bend Wash, city property and some 7 acres of private land Coronado is a testament to city governments past who knew how to get the public and private sector working together for the common good.  Scottsdale has managed to lay off major recreational, flood control, landscaping and other costs on the private sector.  Compare this to other municipal courses around the Valley including Tempe’s Rolling Hills just a few miles away.  There, the city has had to pump millions into the property just to keep it going.
But Scottsdale doesn’t have to do that at Coronado.  This doesn’t mean the operation doesn’t have challenges.  There is only so much money in the driving range and affordable golf course business.  It even faced elimination over a decade ago when one of the most controversial city managers in Scottsdale history, Jan Dolan, sought to replace the course with practice fields for the San Francisc 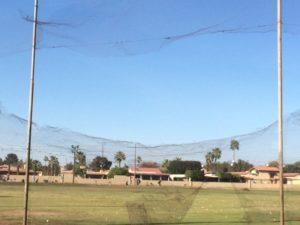 o Giants.  Scottsdale elected officials can still hear their ears ringing from the outcry of golfers who successfully rallied against the plan.
Fast forward to the present.  Two neighbors living on the ninth hole with too much time on their hands have asked the city, via a citizen’s petition, to not allow new driving range poles to be erected.  And, they have asked the city to eliminate the golf course and expand El Dorado Park into it.
This is asinine.
Anyone at the City of Scottsdale from Mayor Jim Lane to Virginia Korte to Kathy Littlefield to anyone on staff should have their head examined if they entertain such a notion. 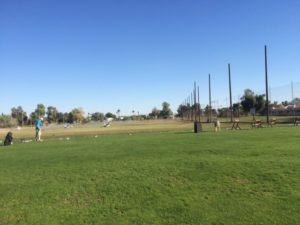 First, the poles.
Here are some pictures of the current fencing between the driving range and 9th hole.  The fencing is old and needs to be replaced in order to protect golfers playing the final hole.  So what does the owner responsibly do?  Buy wooden polls from SRP and begin the process of replacing the fence with new netting and such posts about 40 or 50 feet high.  But TWO neighbors don’t like that idea.  So city staff makes the golf course operator’s life miserable. What gems.
Mind you, wooden utility poles  run up and down Miller behind the neighbor’s homes.  Wooden poles are used for driving range protection at the Continental Golf Course just north of Coronado.  And they are used at the Cracker Jax driving range in north Scottsdale.
So why not here?  Double bogey is a bad score in golf and it describes these two stooges and their illogical argument. 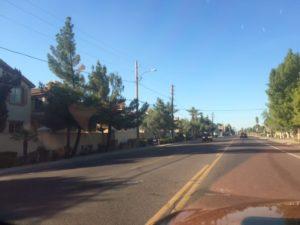 Next, what about the idea of eliminating the golf course and expanding El Dorado Park into it?  Does anyone know where those millions will come from?  This would be Villa Monterrey on steroids at a time when Scottsdale has less money for capital projects, especially needless ones.  Don’t forget 7 acres of the course is private land.  So that would require condemnation of the land, payment and then ongoing maintenance.  All of this would need to take place over the outcry from the course’s constituency which numbers in the tens of thousands.  It can be reignited at any time, just like the San Francisco Giants’ caper.  We hope the owner strongly considers doing this to remind all at the City of Scottsdale that city leaders past created a real gem on those acres.  And it should remain that way rather than so frustrate the owner that he finally throws up his hands, throws away the course and puts apartments on his 7 acres.  Now that would be a travesty, but also some sweet justice for those who luxuriously complain about a golf course as a neighbor only to get some big, ugly apartments as new ones.