Scottsdale is the “West’s Most Western Town” but some neighbors (hardly all) want to stop that notion west of Scottsdale Road, along Cactus.
As we have written about before there is the place a renowned businessman and his wife hope to build an equestrian paradise on six acres called Rancho Paraiso.
It seems a natural fit for a community that has lost a few Stetsons in recent years.  But some neighbors are actually opposing the first-class facility because 50 horses there 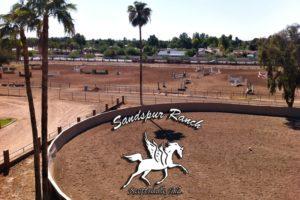 would create too much “poop.”  That’s not a joke. In an area dominated by horse properties that collectively stable hundreds of horses they are actually complaining about steaming nuggets.
That’s a little like someone living in the desert complaining about coyotes.  Whoops, we already have one of those neighbors poignantly picked apart by this recent opinion piece in the Arizona Republic. Here is a link.  Perhaps Seth Gortler and Todd Eden will oppose the McDowell Sonoran Preserve next.
More equestrian properties in Scottsdale are a good thing. Indeed, a massive horse property on Cactus east of the 101 called Sandspur Ranch is the anchor of that area.  It has a whopping 205  horse stalls as opposed to the 52 proposed at “Najafi Ranch.”  It’s been there for decades.  And guess what?  When it sought to expand in 1987 how many complaints were there?  Zero.  How many complaints are there about the property now?  Zero.
How many complaints will there be about a premier equestrian facility like Rancho Paraiso after it opens?  Zero.  But that’s not what will happen to property values.  They will rise. And Scottsdale’s western heritage will be enriched.  Just as it has been with Sandspur Ranch.