Michael Collins is the Mayor of Paradise Valley.  He likes to get things done.  He’s about the destination, not the journey.  So are most of the rest of the people serving on the Paradise Valley Town Council.  It’s a town of the accomplished.  It’s also a town started by the likes of O’Connor, Rehnquist and Goldwater.
With historic names like that it might seem odd to argue the tony town’s end of history.  But it may be at hand.
Consider that Mountain Shadows is rising again.  Indeed, the hotel at its heart will re-open March 7th thanks to the enterprise of locals Scott Lyon and Bill Nassikas, and a very wise Town Council that paved the way for it all, unanimously, just several years ago.
Then there is the large swath of land at Lincoln and Scottsdale Road that’s been the home to dozens of acres of creosote for ages, but soon it will be an economic and luxury engine that is the Ritz-Carlton and associated residences.
Not too far away is a property that used to be a struggling stepchild of Paradise Valley resorts:  The Cottonwoods.  But just a few months ago it was reborn as the Andaz, an emerging hotel brand the world over.  What they did to transform the tired property rivals that taking place at Mountain Shadows. 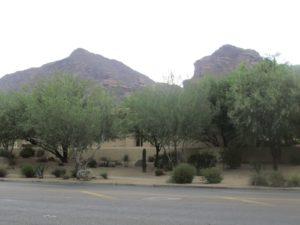 Even the town’s Bermuda Triangle, a bedeviling 4 acre parcel along Scottsdale Road north of Cheney Estates, appears ripe for resolution thanks to local residents Geoffrey Edmunds, Rod Cullum and a thoughtful approach by all including the Town of Paradise Valley and the Marriott Corporation.  Underappreciated flood control problems may be resolved as part of the proposal too.
And mobile phone service is getting better as well!
So what’s left to do in Paradise Valley?
Well, it would be nice if the Smoke Tree Resort could smoke the peace pipe with someone, anyone to finally redevelop its chunk of land near AJ’s.  Besides that however the police department has more resources to do a better job (except when it might be favoring certain councilmembers) and the town’s finances are in very good shape.
Former President Bush once mistakenly declared “Mission Accomplished” on an aircraft carrier about the Iraq War.  But those who say so now about Paradise Valley would be far closer to the mark.  It is not hyperbole for Mayor Collins to call the community the best small town in America.  And for future custodians of the great, good place to simply focus on doing no harm.