The U.S. Supreme Court saved nearly 1 million young immigrants who grew up as Americans from potentially being deported with its decision to keep the Deferred Actions for Childhood Arrivals (DACA) program in place. The DACA decision protects Dreamers who were brought to the U.S. by their families at a young age and upends the Trump Administration’s current effort to end the program started by former President Barack Obama in 2012.

The decision is welcome news for Antonio Valdovinos, a 27-year-old entrepreneur who grew up in Phoenix and learned of his undocumented his status on his 18th birthday when he tried to enlist the U.S. Marines.

Valdovinos’ story is so powerful that it inspired a record setting musical, Americano!. The original production chronicles Antonio’s journey as a Dreamer and an American. Americano! set all-time box office records during its 27-show run in late January and February at The Phoenix Theatre Company. The production is a centerpiece of The Phoenix Theatre Company’s 100th anniversary.

“Dreamers across the country welcome the Supreme Court’s decision to stop the Trump administration’s effort to end the DACA program. We are Americans and this is the only country we know and love. The decision saves Dreamers, like me, from potentially being deported,” Valdovinos said.

After being turned down by the Marines, Valdovinos turned to community service volunteering on political campaigns and then forming his own grassroots voter mobilization firm.

“Dreamers are entrepreneurs and community advocates. They are students, small business owners, teachers and artists. They are also first responders, health care and medical workers who have been battling for our communities on the frontline of the COVID-19 pandemic. We are Americans,” Valdovinos said. 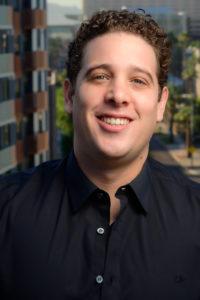 Americano! held a special performance for students at Camelback High School. Valdovinos graduated from Camelback. He was brought to the U.S. by his parents when he was 2-years old.

Americano! The Musical features original songs composed by Austin-based singer / songwriter Carrie Rodriguez and arranged by Sergio Mendoza, an Arizona native and Latin music pioneer. Mendoza is founder of Orkestra Mendoza. He is also a member of the Grammy nominated band Calexico.

For more information on the production: AmericanoTheMusical.com