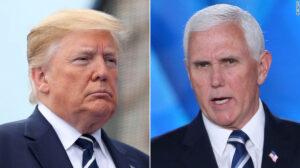 Arizona isn’t a stranger to bitter GOP primaries; after all, in a right-leaning state, the winner of the primary is usually the winner of the general election. Real power is on the line, and whenever that’s the case things can get ugly and nasty. This year seems to be taking the cake however, it’s coming at an awful time, and it is all centering around a one-man wrecking ball.

Yep, even though Donald Trump isn’t on anyone’s ballot, he is still managing to be the source of a potential political civil war for the GOP. He is doing his best to make Arizona a big purity test of whether or not candidates are willing to overturn an election.

Look no further than our gubernatorial primary, which has become a de facto battle between Trump and nearly everyone else. The symbolic nature of Trump holding a rally for Kari Lake and Mike Pence holding one for Karrin Taylor-Robson on the same day told the story better than we ever could. The fact that it happened right around the disturbing video and testimonial from the White House during the January 6th insurrection was just an extra chef’s kiss of oddity.

Perhaps even more bombastic is the battle between AZ GOP Party Chair Kelli Ward and anyone who doesn’t sufficiently kiss Trump’s ring. She even went so far as to censure Speaker Rusty Bowers for having the audacity of…giving testimony to the January 6th commission when asked. The nerve!

Kelli Ward is absolutely doing her best to sow as much discord as possible, picking fights with a few members of her caucus including both Bowers and TJ Shope, both respected members of their legislative caucus, as well as breaking tradition by very openly helping out Kari Lake in her primary. She doesn’t need to be doing any of this, but she must perceive that some great rewards are coming her way by doing Trump’s bidding.

Meanwhile, despite what Trump thinks, he almost certainly will not be President again. His efforts to make everything revolve around not the principles he espouses, but about what he thinks is a stolen election. And when you follow the whims of someone who is 110% focused on their own self interest, it won’t work out well for you when your interests no longer align. When Ron DeSantis or Greg Abbott gets the Presidential nomination in two years, all of this butt-kissing will be mostly for naught.

Despite Biden’s best efforts to fail, Roe v. Wade ensured that this year won’t be a slam dunk for Republicans. Everyone needs to be focused and on the same page, but a one man wrecking ball is making that very difficult.