John McCain’s deployment of so much left over presidential money in his 2010 Republican primary battle against J.D. Hayworth was designed to send a message: don’t mess with me. 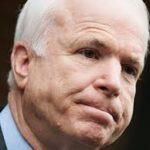 And while he won convincingly times have changed. McCain may well be the next Chairman of the Senate Armed Services Committee, a perch from which to raise lots of money. But he won’t have the $20 million that went unused during his 2008 run. Add to that a few things.
First, the Citizens United decision could provide a McCain challenger major, stealth resources.
Second, McCain’s numbers among Arizona Republican primary voters are awful. It is why McCain endorsements during the primary election were almost non-existent. People knew of his toxicity and didn’t want to be a part of it.

Yet there is the sense, especially after his drubbing of Hayworth, that although McCain is vulnerable is he really beatable?
At least four significant people now considering the race think he is.
Mark Brnovich is not one of the four but consider his import to their deliberations.
He has already proven his ability to defeat a tenacious incumbent in his own party. If he gets to the political promised land on Tuesday he will have concluded that tough is not too tough.
McCain isn’t Horne. But at least Horne had a base of support that prevented the primary from being a blowout. Today, what exactly is the McCain constituency in Arizona?
Upstarts facing U.S. Senate incumbents didn’t do as well in 2012 as they did in 2010. Then again the cycles are always different and Arizona does offer the lessons of Brnovich, where the results against McCain could be MARKedly different for any of the four now considering.