The proposed Desert Discovery Center is one of those ideas that’s been around a long time.  Like wine, some think this is cause to savor the idea further.  Once envisioned as something like an environmental Disneyland it has morphed into something more akin to a duplicative Desert Botanical Garden.
Some on the Scottsdale City Council like Linda Milhaven, Virginia Korte and Suzanne Klapp join many in the local tourism industry and strongly support the project. 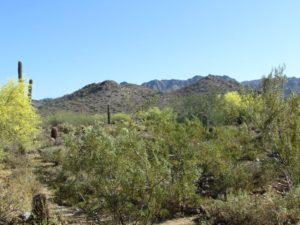 Mayor Jim Lane has supported studying the matter further with no commitment to the final project, a position similar to Councilmembers David Smith and Guy Phillips.
Councilwoman Kathy Littlefield opposes the project even though her husband Bob, a failed state legislative candidate last cycle now running for Mayor, supported the project in 2008.
There’s support, opposition and caution but few would disagree the plan is controversial.
That’s why we applaud a petition brought to the City Council last night by north Scottsdale activist Howard Myers.  That citizens have such rights in Scottsdale is testament to its responsive government.  Myers asked the City Council to require a public vote on the project’s ultimate request for funding and design.
We agree with that request.  Some cities like Mesa and Phoenix have requirements for public votes when sufficient taxpayer largesse is involved.  While those amounts seem absurdly low to trigger votes – in the case of Mesa $3 million – the Desert Discovery Center is projected to cost tens of millions of dollars.
Mayor Lane cast the deciding vote on the new requirement, joining with Phillips, Littlefield and Smith.  Good for them. Now we’ll see how good Desert Discovery Center advocates are defending their project.  Their climb to convince voters will be as steep as standing in the majesty of the Gateway, looking up at Thompson Peak, knowing that God’s work is terribly difficult to improve upon.