Phoenix, AZ (January 4, 2021) Arizona-based Data Orbital has consistently been one of the most accurate election pollsters, and the 2020 cycle has solidified that. Given an A/B rating (one of the industry highest) by political data website FiveThirtyEight and a member of the American Association of Public Opinion Researchers Transparency Initiative, Data Orbital has long prided itself on its industry-leading work. 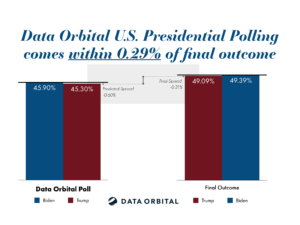 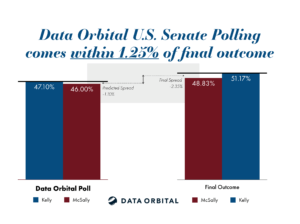 While not all of these surveys were released publicly, our firm surveyed 25 distinct races this cycle – from County Supervisor to President – and accurately predicted 80% of the outcomes. When removing polling for State House (a pick-two race), the predictive accuracy becomes 100%. 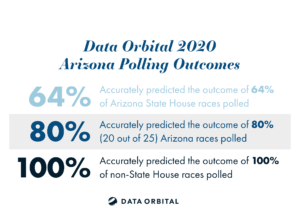 George Khalaf, President of Data Orbital had this to say: “When I launched Data Orbital in 2014, I set out to create a top-tier survey firm with a boutique feel. From starting with a handful of surveys in Arizona in our first cycle, to now having conducted hundreds of surveys in more than 15 states, Data Orbital is the go-to Arizona survey research and data visualization firm. Our numbers speak for themselves – if you want accurate information, you need to work with Data Orbital.”