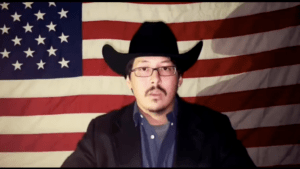 You almost certainly aware of the QAnon movement, the far-ranging group of halfwits who believe that Congress is a big child sex-trafficking ring and that Trump would jail all of them and come back and become president again. Perhaps you didn’t know that one of the people widely believed to be a person posting as “Q” and ginning up the conspiracy theories as a supposed a Washington insider is running for Congress in Arizona. Well lucky us, he descended upon the public comments of a recent SUSD meeting.

Ron Watkins is currently in the middle of a likely-Quixotic bid for Tom O’Halleran’s seat in the largely rural district 2 in northern Arizona. So why was he at an SUSD meeting? Clearly for attention and shares on right-wing platforms Gab and Telegram.

In the video of his rant posted on Twitter, Watkins goes on about the communist takeover of America, about communist school boards brainwashing kids with “transsexual propaganda” and “teaching them to be racist against white people”.

Does Watkins think that he stepped into a San Francisco school board meeting? Or Portland? Does he need a Maps app?

To be fair, we did talk about a potential leftward lurch at SUSD. Also being fair, that’s coming from a right-leaning position in a right-leaning town. That’s like saying that Arizona is a progressive utopia because it voted for Biden and Mark Kelly last election.

Also worth noting: the district that Watkins desires to represent is absolutely nowhere near Scottsdale. It can’t feel great to anyone that our city is being used as an attention-grabber for one of the most odious candidates for office in recent memory.

So why there? The controversy. SUSD made national headlines for reasons that I don’t even need to bring up again as they were mentioned more than enough times on this blog. It became a maelstrom of controversy, and like numerous other politicians before him, riding that wave is an easy way to get attention.

So lucky us: the Jann-Michael Greenburg controversy as well as the litany of anti-masker protests have had the lasting legacy of turning SUSD into a circus for political clowns. We can only hope that this passes quietly and soon.