Containment.  Mutually Assured Destruction.  The Domino Theory. Balance of Power.  Trickle Down.  Vouchers.
These are the words of famous philosophies, some more than others, thought to describe the best governance for our schools, economics and foreign affairs. 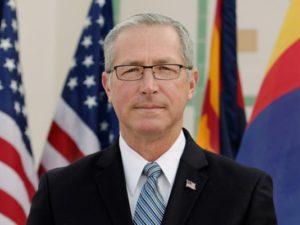 Here in Arizona a new philosophy by an unexpected voice is noteworthy.  “Gradualism” as proffered by Arizona Corporation Commission Chairman Doug Little, seeks to change state energy policy gradually, not in whole cloths as utility companies are demanding.  They are doing so to both increase profits and deny customers a chance to save when rates rise via solar technology and other means.
Little’s is a voice unanticipated because heretofore he’d been thought to be a marionette of the Arizona Public Service monopoly.  But we can’t think of a better name than Little to espouse a common sense, mature philosophy like Gradualism for the little steps it espouses.
Take the Chairman’s recent approach to a Canadian utility’s attempt to impose “demand charges” in the Arizona territories of Lake Havasu, Kingman and Nogales.  Sure, Little’s rejection of the proposal was a reaction in part to the extraordinary public opposition to the idea that one’s utility bill should be based on the highest use in any one day.  But his approach also seemed to be firmly rooted in the concept of gradualism.  While it’s good to be first in the nation for some if not many things why is it necessary for Arizona consumers to be the laboratory rats for rate hikers, you could almost hear his thinking go.
The Little Doctrine runs contrary to this notion.  It does not forego big ideas – and we would argue demand charges are a bad, big idea – but as the concept goes if major change is to be undertaken it should be phased in so as not to shock the ecosystem.
Little seems to be suggesting an application of gradualism as it relates to the raging debate over rooftop solar too.  Little saw, and talks about, the effects of a recent Nevada decision that has effectively wiped out the solar industry there in favor of the dominant utility.  Closer to home, Little has also witnessed the evisceration of solar in Salt River Project’s territory when it imposed demand charges and neutered net metering, a key policy to encourage solar use.  Both of those decisions were drastic, not gradual.
To be fair, Little’s gradualism seems to be gradual movement to that which his 2014 campaign benefactors at APS headquarters want.  Still, it is refreshing to see an Arizona Corporation Commissioner showing both spine and substance.  Arizona will be the better for it if Little continues to a big voice with a smart philosophy.