Carolyn Mullany Jackson is setting the bar on what it means to be a good corporate citizen. She has her hands full as the Vice President of Brand Strategy for the Barrett-Jackson Auto Auction. She oversees the company’s image here in Arizona and across the country as it conducts collector car auctions including June 20th in Connecticut and September 27th in Las Vegas. 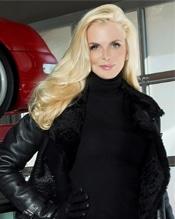 She has also been tasked with serving as the Chairwoman of the 58th annual Phoenix Heart Ball, which in itself is a full time job.
Scottsdale’s donor class is a point of pride. It is always encouraging to see businesses and individuals willing to donate financially for the greater good.
Jackson takes that a step further by giving her time as well as her money. The Heart Ball is a vital part of the American Heart Association fundraising events both locally and nationally. Serving as Chair is a major commitment in terms of time and effort. Her involvement with the Heart Ball goes back to 2013.
Jackson has always added a dose of innovation to her charitable works. In 2014 and 2015, she co-chaired the “Sound of Speed” that combined racing, cars and music collided to benefit The Phoenix Symphony.
Charitable works are part of the Barrett-Jackson legacy. Carolyn Jackson oversees Barrett-Jackson’s philanthropic efforts.  She continues working with charities that were important to Craig Jackson’s mother such as Childhelp and TGen in addition to charities such as the Juvenile Diabetes Research Foundation, Paralyzed Veterans of America, country music artist Zac Brown’s passion project Camp Southern Ground and Steven Tyler’s Janie’s Fund. Over the decades Barrett-Jackson has raised more than $90 million for organizations in Arizona and across the country.
The number is impressive but it doesn’t tell the whole story.
By getting involved Carolyn has engaged others and inspired them to open their wallets for the greater good. Good corporate citizenship is more than the admirable act of giving to charity. It involves building a bridge between donors and the organizations that need help.
Some of Scottsdale’s great companies can get a little short in the arms when it comes to giving back to a community that’s been so good to them. But not Barrett-Jackson. Not Craig Jackson. And not Carolyn Mullany Jackson who is setting an example for us all.