Once upon a time one of us involved with this blog had an opportunity to listen to Wisconsin Governor Scott Walker in a small setting.  A pretty boring guy who reminded us more of a Republican Michael Dukakis he nevertheless piqued our interested when talking about how and why certain voters in his state voted for him, but then opted for President Obama too.  Walker-Obama voters?   A strange political breed indeed.
It was a fascinating discussion he ascribed to “leadership.” Walker of course is and was famous for his stand against public sector unions, a fight that played out years ago on national television.  Walker could have caved like Arizona  Governor Doug Ducey did to teacher unions this past year.  But the Wisconsin Governor didn’t.  And while he came up short in his quest for the White House he has been impressively re-elected to the post. 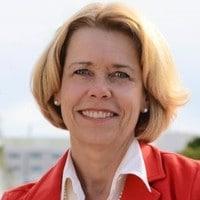 Swimming against the tide ain’t easy.  And the tide in Scottsdale these days rolling to shore comes in the form of the incredible grassroots movement to kill the ridiculous Desert Discovery Center.  And make no mistake, that project is dead.  The political priests have read the rights.  It’s over.
Yet, Scottsdale City Councilwoman Linda Milhaven refuses to tip to these windmills.  Check out her comments in the recent Scottsdale Independent about the project, now that there will be a public vote on it in November.  Here is a link.
Standing her ground Milhaven is the only councilmember who says she will be voting no.  Mind you, this is a measure that may pass with upwards of 80% of the vote.  Yet the erstwhile Milhaven, up for re-election, doesn’t waver.  This stands in contrast to previous supporters like Councilman David Smith and Councilwoman Virginia Korte who are flapping in the wind like puffins during an Icelandic summer.
While we profoundly disagree with Milhaven on this issue, and have on matters concerning WestWorld too, we recommend her for re-election.  Why?
Well, just as it is helpful to have someone on the council to argue the downside to growth and why applying the brakes might makes sense so is the governing body  enhanced by having Milhaven’s unabashed pro-business approach articulated from the dais.  And her love for Scottsdale arts remains indispensable.
But to answer our own question we go back to Walker.  For when the storm clouds hit and the flood levels rise, who has the spine to run into the storm, politics be damned, to help navigate your flood?  Milhaven is the antithesis of groupthink and a reminder, right and wrong, of what leadership is.