The AZ Republic has endorsed my campaign for Secretary of State. In fact, they said “it was an easy call”. Please read their endorsement here:
Reagan has acted like secretary of state for years
Editorial board, The Republic | azcentral.com
Our View: State Sen. Michele Reagan has a long track record of election-law reform, which best prepares her for this office.
The traditional duties of an Arizona secretary of state, such as keeping essential records and overseeing elections, seem so quaint these days. So anachronistic.
Election-related duties are more tied now to hot-button political issues pitting the interests of the parties against each other.
Keeping a list of voters who automatically receive early ballots, for example, once may have been an apolitical housekeeping matter.
But don’t tell that to the Republicans and Democrats fighting over whether to cleanse the list of people who don’t vote early.
Likewise, the secretary of state is at the center of the debate over “dark money,” the money spent by all-but-anonymous organizations.
The office should be an honest broker for developing policies to bring transparency to such groups. Again, that has become a fierce partisan battle that can compromise the office if the elected secretary of state lets it.
And then there is a history of Arizona secretaries of state ascending unexpectedly to the governor’s office. That is a consideration when weighing whom voters should favor.
In the Republican primary race for secretary of state, one candidate is well suited for the job under these modern-day qualifications. Another may have the intellectual chops to grow into the job. A third does not belong in the race. 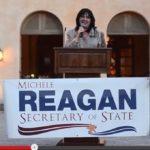 The top-rung candidate of the three Republicans vying to be secretary of state is Michele Reagan.
It is an easy call.
As a state senator from Scottsdale, Reagan made reform of campaign-finance disclosure laws and election law a top priority.
In 2013, Reagan put together a sensible, serious-minded package of election-law reforms with the help of all 15 Arizona county election directors, Democrats and Republicans alike.
That those reforms were scuttled because of partisan overreach by Republican legislative leaders is no reflection on Reagan. She demonstrated she knows what the state needs to do to wrest elections away from partisan manipulation.
We are confident that as secretary of state she will use the office’s bully pulpit to get those reforms done.
Reagan also wants to open the curtains hiding dark-money contributors. She appears committed to the long, hard task of peeling away their cloaks, a noble task.
Reagan’s principle opponent is Justin Pierce, a state lawmaker from Mesa. Pierce would target many of the same reforms Reagan has championed.
He also is the sole beneficiary in this primary of an independent-expenditure campaign group. From a dark-money source, in other words. He defends the secrecy in which it operates.
In any other race, that modern-day election reality may not give reason for concern. In this race, it does.
The third candidate, Mesa businessman Wil Cardon, has troubles beyond this race to which he should attend.
Cardon is being sued by six of his siblings for using more than $6 million they contend was not his to spend in his unsuccessful 2012 race for U.S. Senate. Cardon does not seem well suited for this office.
Michele Reagan is. The Arizona Republic strongly recommends Reagan for the Republican nomination for secretary of state.