What will history decide in 2014?
Back in 1994 a vulnerable Governor Fife Symington overcame a spirited primary challenge from the impressive Barbara Barrett and then came from behind to defeat the formidable Eddie Basha, God rest his soul. 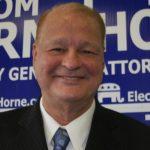 But in 1992 the Arizona GOP was not so lucky. Then, incumbent Congressman Jay Rhodes eeked by a number of primary challengers,only to lose the general election to Democrat Sam Coppersmith.
The stakes for the Arizona Republican Party as it relates to the similarly challenged and embattled Arizona Attorney General Tom Horne in 2014 are higher.
The set of circumstances surrounding Horne have grown so profoundly negative, and in some cases downright comical, that the torrent of television commercials soon to come threaten other statewide officials.
It’s that bad.
Horne’s identity has become so enraptured with title that he is now doing things he knows are stretching the boundaries. No one should want to win this badly. And Horne doesn’t need to. He is a capable lawyer that would do just fine in the private sector, as he has before.
That he is being so selfish threatens not only the seat for Republicans, but other Republicans seeking statewide seats too. It’s time for Horne to step aside.