Michael Pollack’s 50 years as a redeveloper, as well as his philanthropy have not gone unnoticed by Governor Ducey who took the time to issue a special commendation in recognition of Pollack’s “Many years of service involved in the development or redevelopment of more than 10 million square feet of real estate projects in the last 50 years.” 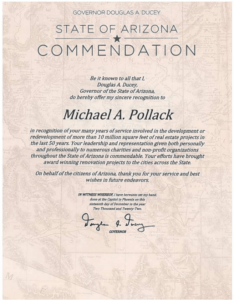 Governor Ducey also recognized the Pollack Real Estate Investments founder “Leadership and representation given both personally and professionally to numerous charities and non-profit organizations throughout the State of Arizona.”

Earlier this month Pollack teamed up with  Child Crisis Arizona, making a $20,000 donation to give 20 deserving Valley families a $1,000 shopping spree at a Tempe Target store.

Pollack has also given both personally and professionally to numerous charities and non-profit organizations in Arizona such as Goodwill of Central and Northern Arizona, Mayo Clinic, Banner Health Foundation, Save the Family, City of Hope, Boys and Girls Club, Boy Scouts of America, Haitian Disaster Relief, Chandler Regional Hospital, Assistance League of the East Valley, Special Olympics, Juvenile Diabetes Foundation, American Cancer Society, and many many others.

As a redeveloper, Pollack is best known for bringing new life to struggling shopping 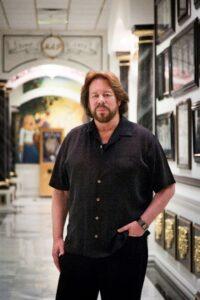 centers, renovating and repositioning commercial properties and revitalizing surrounding neighborhoods with the goal of making Arizona cities better one project at a time.

While based in Mesa, Pollack has helped to create thousands of jobs by bringing renovation projects to the cities of Phoenix, Chandler, Tempe, Mesa, Gilbert, Scottsdale, Glendale, Peoria and Tucson.

Pollack said, “As a fellow entrepreneur, Governor Ducey has always understood that the private sector plays a critical role in providing jobs and contributing to Arizona’s quality of life. My projects have always been designed to improve the neighborhoods they serve because I believe that every community in Arizona deserves quality retail centers. I also believe it is the duty of every successful business to give back to the people in the communities where they do business. My success would not be possible if I had not set up shop in the great state of Arizona many decades ago. Thank you Governor Ducey for all your service, and thank you Arizona for allowing me to build and grow.”

The commendation honoring Michael Pollack was issued and signed by Governor Ducey in December.