The no or slow growth camp was represented by Carter, Graham, Littlefield, and Whitehead while Ishac, Stratton, and Zubia represented a more open approach in terms of new development.

Candidates were asked what building height and density should look like in Old Town and Downtown. 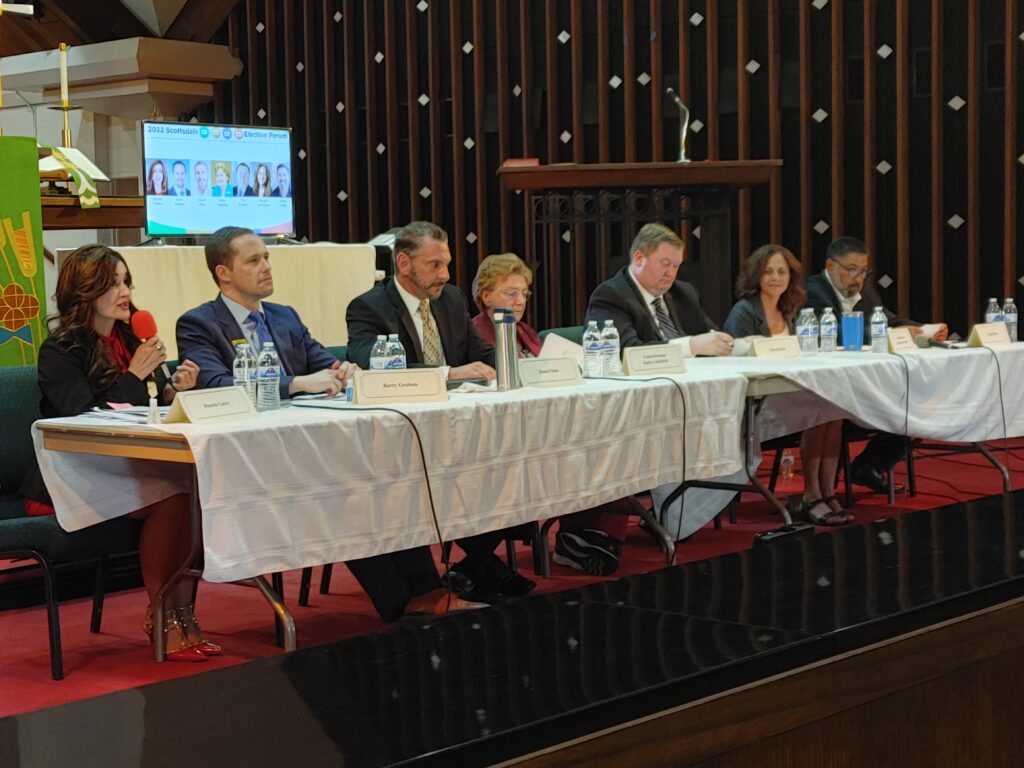 Graham was quick to restate his opposition to high rises. “I don’t think we should be going 8, 12, 15 stories… Old Town should be protected as it is. That is a tourist draw.” Looking at Downtown development Graham commented, “There are places where they want to add 10 to 12 stories downtown. You have to think about what that does to traffic, the incremental use of water and public safety.”

Ishac was more pragmatic, “I don’t believe we should be building high density high rises in the old historic part of Downtown, but I do believe there are other areas within the Old Town Area Plan (which includes Downtown Scottsdale) that can support larger buildings….but I am concerned with overdevelopment and density especially in the historic part and we have to make sure we protect our neighborhoods and not create problems where we don’t need them.”

Littlefield said heights and density should be limited in Old Town and in Historic Downtown claiming high rises would ruin the tourist experience.

Stratton acknowledges that tourism is Scottsdale’s lifeblood and he supports preserving Old Town. “As for the rest of Downtown Scottsdale, there are areas where it is more appropriate to have a little bit more height and density.” He also notes that not everyone visits Scottsdale solely for its western charm and it’s important to keep Scottsdale relevant for tourism.

Zubia says Old Town should be preserved but other areas of Downtown could be built upon such as the old hotels that are not in use, but he says that does not mean high rises.

Carter wants to preserve Scottsdale as a tourist destination and protect the city from high density and over development.

When asked what the city could do to incentivize attainable housing, the candidates offered some contrasting responses.

Pam Carter said, “I don’t think that Scottsdale is ever going to be affordable.” She added, “Not everyone can afford to live in Scottsdale. It is an aspiration to live here.”

Graham took the opportunity to voice his opposition apartments, “If we continue to go down the path we are going, we are going to lose the character of our city.” He does support affordable unit set asides citing The Miller as an example. He helped negotiate that deal when he was on the Scottsdale Planning Commission.

Ishac says it’s time to rein in extremism when it comes to housing. “We need to speak about the middle and moderation and stop scaring people.”

Littlefield said low-cost housing is not going to happen in Scottsdale. She does however support set-asides. She also proposed working with neighboring communities to put affordable housing just outside Scottsdale city limits.

Tim Stratton said it all comes back to supply and demand, “We need more housing units across the spectrum.” He also proposed a voucher system for essential workers such as police officers.

Whitehead said short term rentals are driving up the cost of housing and she also said it’s important that the projects already approved get built.

The issue of crime in the entertainment district drew expected responses. A decade ago, former Mayor Jim Lane teamed with neighborhood advocate Bill Crawford to rein in the chaos. Those days may be over.

Littlefield said crime is getting worse and police need more support, “We need to give them the ability to watch the area. In other words, we need to have the police be able to do their jobs, and we’re not doing that.”

Stratton was more direct. “I believe police have the ability to go in and arrest folks. What we need are more police.” He said there is a recruitment problem. He also suggests better lighting in the bar district.

Whitehead says when it comes to keeping the peace in the entertainment district, more of the burden should be handled by bar owners as opposed to taxpayers.

Zubia has noticed an increase in crime in the entertainment district and proposes a dedicated police unit.

Carter said she is concerned about panhandling, drugs, and party houses and called for more police support.

Graham blamed part of the problem on density. “We are going down a road that is making us look like cities that we don’t want to emulate.”

There were a couple of topics that saw all seven candidates on the same side.

Last Year Mayor David Ortega floated the idea of purchasing 15 to 20 rooms from a hotel to ease homelessness. All seven candidates soundly rejected the idea. They all pointed to working with faith based or social service agencies.

On the topic of Scottsdale electing council members by district instead of at large as is the current system, all seven candidates said they do not favor the idea, with Graham and Stratton adding that the question should be left to the voters.