Think back to 2010. U.S. Congressman John Shadegg announced his retirement. A coveted seat, largely populated by Anglos, was open. A mad scramble ensued. But during the course of the candidate positioning can one imagine if there were an orchestrated effort – and one actually signed by political leaders – to keep the seat for whites? Vernon Parker, the then African-American Mayor of Paradise Valley who later became a candidate to replace Shadegg: No votes for you. Or Paulina Morris, a Latina, sorry you shouldn’t be considered because of your skin color. Thankfully that didn’t happen and in that Republican primary there was rich diversity.
Compare that situation four years ago to what’s occurring now in Arizona’s Congressional District 7, after Ed Pastor announced his retirement.
There, Arizona’s chief race-baiter and biggest political loser, Mario Diaz, has organized Latinos to discourage not only white Congresswoman Kyrsten Sinema from switching districts, but to declare this a seat for Latinos only.
This is a curious effort from Diaz. Not too long ago he took to the pages of the Arizona Republic to declare that Phoenix’s southwest oriented council district, long-served by African-Americans, to be only for them despite the shifting demographics tow 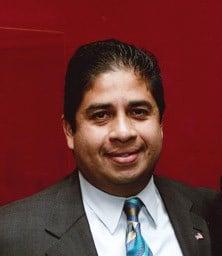 ards Latinos within the area. Diaz then went on to run revered Pastor Warren Stewart’s campaign into the ground, achieving through incompetence what he discouraged by the pen. A Latina won the seat.
So here we go again. Diaz searching for relevance long lost by so many defeats. But it’s no more acceptable than if the hoods came out to declare a similar race requirement post-Shadegg. A Latino may very well win and serve nobly as Pastor did. But it should be won on the merits, not skin color.