As the 2014 election cycle gets underway there may be no easier endorsement, even at this early date, than current Vice Mayor Michael Collins to assume the top position.

With Mayor Scott LeMarr leaving on top after more than two decades of public service to the town, Collins offers the compelling combination of continuation, experience and talent.

He chaired the community’s Public Safety Task Force that has resulted in a decrease in crime. 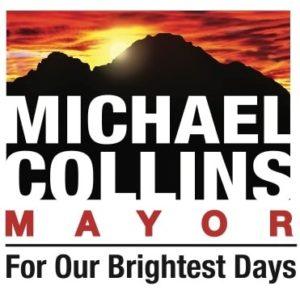 He chaired the town’s General Plan efforts passed by a whopping 80 percent of voters.

He voted for the Mountain Shadows redevelopment plan that has already resulted in the removal of rat infested buildings at 56th Street and Lincoln.

He leads not only in the Town but a business with 45 employees that does land use planning for the U.S. military.  He is a veteran of the U.S. Navy, father and husband.

The only thing seemingly missing from his resume is an ability to guard Lebron James or Kevin Durant.  Oh well, we’ll leave that to another Paradise Valley resident named Robert Sarver to figure out.

A campaign just several days old Collins has racked up endorsements from just about every member of the current Town Council, and a substantial number of those serving previously.

This Michael Collins is not a revolutionary like the Irish hero.  Thank goodness.  Paradise Valley already is a great place, headed in the right direction.  It needs a steady, experienced hand to continue such success.  As Collins is now saying in his campaign materials “Low Density, Low Crime, Low Taxes and High Quality of Life.”

Collins gets it. That’s why why Paradise Valley voters would be wise to get Collins as their next Mayor on August 26th.