By Paula Ngon
Student:Arizona State University
With the 2016 Presidential election quickly approaching, the amount of candidates still occupied with playing the political games are giving voters no definite direction. The mudslinging is splitting the country in different directions regarding who is fit to run this nation. However, one candidate is gaining momentum by doing things differently.
Bernie Sanders is blowing the door to American politics wide open this campaign season as he surges in the favor of the next generation. It comes as a shock because Sanders, 74, is nearly three times as old as some of his biggest supporters however, he has definitely rocked the millennial vote.
With the boisterous empty promises of Donald Trump and the investigation scandals surrounding Hillary Clinton, Sanders offers a refreshing take on this election cycle. He is seen as trustworthy, honest, and clean and voters praise his consistency and transparency. 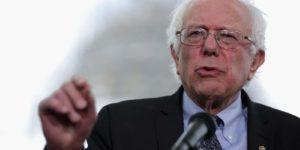 He is fighting for progress, a value young voters are rallying behind. Millennials want advancement and improvement of our society, not a backwards march to the reign of yet another Clinton or Bush presidency. With the generation’s current lack of faith in the government they are looking to start anew with fresh ideas, new systems, and a different type of leader.
A vote for Bernie is a vote for a man who has been fighting for the same issues that have troubled young voters for years when no one else was listening.
The Sanders’ campaign has ignited engagement in younger voters who are concerned with the direction this country is headed. Bernie cares about education, he cares about equality and he cares about equal opportunity for all. His focus on national issues gives hope that this country will change for the better.
Not only does he have the endorsement of the younger generation, he has the accompaniment of their passion and skill for social media. The buzz surrounding Sanders on the internet is astonishing. Supporters are creating memes, merchandise, and hashtags to generate name recognition and endorsement and they’re succeeding.
In a system where our politics tend to support the rich, Sanders refuses to be bought by big money, sticking to his values and his platform. He isn’t working for the wealthy in this election, but instead for the college students and graduates paying off loans in an attempt to make a better life for themselves in order to someday takeover presiding over this country.
Bernie is their mouthpiece and people are beginning to listen. Sanders’ supporters are passionate and faithful to his campaign and unyielding in making sure the rest of America can #FEELTHEBERN just as they have.