(Scottsdale, Ariz.) Their life stories couldn’t be more different and their backgrounds more diverse, but all three create unique art and are genuine trailblazers who have made or continue to make Arizona history.

The Larsen Gallery will be exhibiting for the month of February works by the legendary Native American artist Fritz Scholder, outgoing Arizona House Speaker Rusty Bowers, and groundbreaking 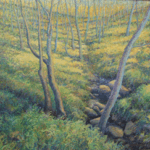 artist Ahmed J. Cannon.  An Opening Reception will be held on Thursday, February 2nd from 5 -8 pm at the Larsen Gallery located at 3705 N Bishop Lane in Scottsdale. Those interested in attending must RSVP to RSVP@LarsenGallery.com.

In addition to being a longtime fixture in Arizona politics and the outgoing Speaker of the Arizona House of Representatives, Russell “Rusty” Bowers has spent decades as a professional artist. He is a classically trained artist specializing in watercolor, oil painting, and sculpting.  Now free of the demands and constraints of politics, Bowers is focusing on this decade’s long passion. A lifelong conservative, his decision to affirm the results of the 2020 presidential election and defend those actions before the U.S. Congress earned him a John F. Kennedy Profiles in Courage Award in 2022.

Scholder’s work continues to draw international acclaim nearly two decades after his death. His art is featured yearly at the Larsen Gallery. Primarily based in Arizona during his lifetime, his paintings 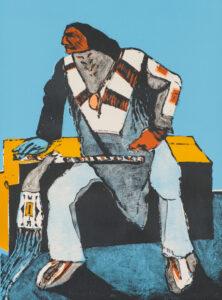 have helped redefine Native American art while shattering stereotypes. Scholder’s art has been the topic of more than a dozen books and two PBS documentaries. His art is in the permanent collections of numerous major museums, including the Museum of Modern Art in New York. In recent years the value of his works has rapidly accelerated in value, routinely fetching hundreds of thousands of dollars for a single painting.

Cannon was born in Chicago. He trained in and is currently based in Scottsdale. Cannon specializes in realistic oil portraits. His series The Jazz Men includes portraits of Dizzy Gillespie, George Benson, Louis Armstrong, Herbie Hancock and Arizona’s Doc Jones.

A large portion of the sales from Cannon’s work will benefit the Molina School of Jazz, a local charity that provides music education for children. Doc Jones serves as its Executive Director.

The exhibition for all three artists will run from the Opening Night Reception on February 2nd through the entire month of February to coincide with Black History Month.

Larsen Gallery Owner Scott Larsen said, “We are a Scottsdale based auction and gallery with deep Arizona ties. It is an honor to showcase works of art from such a diverse trio of artists. Their backgrounds and life stories are as divergent as the works they create, yet they still share Arizona roots that impact their art and countless artists who have spent time in our great state. The art is compelling, original, and trailblazing.”

Larsen Gallery Owner Polly Larsen said, “Artists such as the ones featured in this exhibit help affirm Arizona’s prominence in the art world as well as paving the way for future artists in our great state.”

“From the halls of the Arizona Capitol and national controversy to the walls of a Scottsdale gallery, I couldn’t be more excited and nervous to exhibit my art for the first time alongside these other artists,” Bowers said.