Tough on crime and tough on illegal immigration. That’s Andrew Thomas in a nutshell. What’s not to like? As a candidate for Governor, Thomas hopes to appeal to the most conservative voters in a split field and capture the GOP nomination. From there, he would look to ride the Republican voter registration advantage to a brand new office on the 9th Floor, from where he would wage war on corruption in the government and the judiciary. Light your torches!
But each news cycle’s coverage of settlements of lawsuits against Maricopa County related to Thomas’ conduct as County Attorney erodes confidence that Thomas is capable of winning a fight against corruption, not to mention an election. 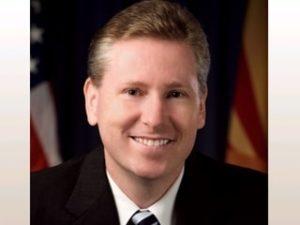 Thomas claims to have been hard on the trail of massive corruption within Maricopa County and for the sake of this post we are going to assume that he was sincere and correct. He indicted a lot of people for a lot of things. We can’t say they were guilty of anything though because they were not convicted. Seriously. Ever. Not any of them as near as we can tell. And we’ve really searched the news clippings hard. Was it because Thomas quit as County Attorney in the middle of these prosecutions to run for Attorney General? Or was it because the indictments and investigations were a really bad idea? Or were they simply really badly executed?
Based just on the number and size of the checks Maricopa County is writing to settle lawsuits filed by the “victims” of these acts, we’re going to concede it might be any or all of the above.
But the facts of the matter that are going to follow Thomas around for his whole campaign, and likely destroy his chances of winning (either in the primary if he ever gets close to the lead or certainly in a general election should he somehow prevail in the primary), are that Maricopa County has spent and paid out nearly $25 Million dollars to settle claims of abuse related to those investigations. No convictions. Just $25 Million in awards. Payments have gone to judges, former supervisors, staff members, developers, newspaper publishers, and more. Some received “small” amounts like $75,000 or $100,000. Others received millions. All in exchange for zero convictions.
And all of the amounts came out of the pockets of Maricopa County taxpayers, giving the most populous county in the state 25 million reasons and counting to not support Andrew Thomas.