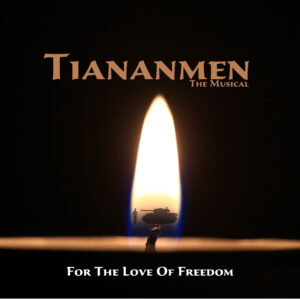 In what promises to be one of the most important new American musicals to premiere in 2023 and just ahead of an upcoming industry-staged reading September 20th, 2022 in New York City, the producers of Tiananmen, a brave and necessary new musical announced the New York cast on Thursday, as well as a major addition to its creative team.

Wu’er Kaixi, who helped lead the protests in China’s Tiananmen Square in 1989 and now lives in Taiwan as an activist for democracy, has joined the production as conceiver and creative consultant.

“It would be as if Lin-Manuel Miranda had Alexander Hamilton alongside as he created Hamilton,” Tiananmen author Scott Elmegreen said of Kaixi’s first involvement. “He has made our script better, more authentic and more powerful since we presented Tiananmen in New York last September and as we get ready for our World Premiere at The Phoenix Theatre Company.”

Phoenix is where Tiananmen’s Lead Producer, Quixote Productions, which is owned by Scottsdale, Arizona public relations executive and entrepreneur, Jason Rose, also debuted ¡Americano!  It recently completed its Off-Broadway run at New World Stages as scheduled, with a total of 86 performances.  The musical’s composer Carrie Rodriguez was nominated for a Drama Desk Award for Outstanding Music and the set was used by President Obama to celebrate the 10th Anniversary of his Executive Order to protect “DREAMers” living in the United States.

Darren Lee (Mr. Holland’s Opus) will serve as the Director for Tiananmen, both for the reading and in Phoenix, where he will as double as the Choreographer.  Music Direction is by Steven Cuevas (Kinky Boots), and the Casting Director is Melanie Tojio Lockyer, the Stage Manager is Kathleen Rose Gallardo, and the Assistant Stage Manager is Lara Sato. They join Elmegreen on the creative team with Drew Fornarola who is contributing the music and lyrics.

Elmegreen is a Lecturer at the University of Chicago, and Fornarola is best known as a composer for DreamWorks. They were most recently represented in New York by their play Straight, a New York Times Critics’ Pick now in development as a major motion picture. Lee has directed and choreographed numerous productions around the country and internationally. He has performed in 11 Broadway shows and in addition to Tiananmen has recently developed the world premieres of Mr. Holland’s Opus, The Gifted Prince, Brain. Storm., and Disney Wishes for Disney Cruise Line. (www.darrenlee.com)

“In light of the ongoing debate, indeed fight between authoritarianism and democracy Tiananmen is a brave and necessary work to remind us all of the hinge of world history that happened in Tiananmen Square at a time when China is trying to erase all that happened there from memory,” said Lee, a Chinese-American.