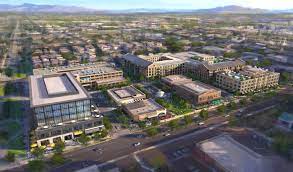 Another week goes by, and another instance of reasonable development projects going up in the Valley in places that are not Scottsdale hits the wire. This time it has some Scottsdale ties however.

Creation RE has gotten final approval to develop the largest parcel of undeveloped land near Gilbert’s downtown area recently. Approval for the Heritage Park project is a significant win for Creation and will be a mixed use development, including offices space, a hotel, apartments, and retail spaces. This comes at the end of a significant development boom in Gilbert, a city whose downtown core is barely recognizable from what it was only a decade ago.

Such developments couldn’t have come at a better time for Gilbert. While we have often spoken about the increase of housing prices around Arizona, no one has been hit harder than Gilbert. And by no one, we mean no one in all of the United States…by a long shot. Believe it or not, a recent report from rent.com shows that in the last 12 months, rent prices in Gilbert have increased by 108.5%. No, that’s not a typo, they are tops in the United States and very nearly double the next highest.

So as rents are skyrocketing, what does the City Council do? They green light new housing projects. It shouldn’t be a radical idea, but it seems to be in Scottsdale.

However there is a significant Scottsdale tie-in to this story: Creation RE are part of the group who bought up the property where the controversial Southbridge 2 property was supposed to go up. Creation RE principal David Sellers is also CEO of LGE Design Build, a highly successful and prolific developer with myriad properties across the country. They know how to create value with their projects, and would almost certainly do the same with the old Southbridge 2 property, even as details have not yet been hammered out yet.

Creation RE would create significant value in Scottsdale with their Southbridge 2 project. They have a proven track record of success across the region. They are helping alleviate the housing shortage crisis in Arizona. So will they have success in Scottsdale? If the City Council read the room and parsed out the bad actors versus the proven experts, they would. We have a glimmer of hope that their successes elsewhere will cause Scottsdale to see the bigger picture and adjust accordingly.