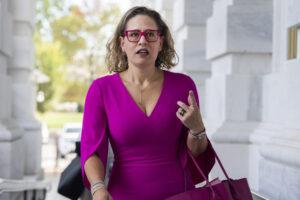 In what was a surprise to absolutely no one, the Arizona Democratic Party voted behind closed doors to formally censure Kyrsten Sinema this past weekend. If there was a single saving grace for Sinema (other than the potential support it may elicit from registered independents and other politically homeless voters), it’s that it was not done in a vote of State Committee members, which likely would have been embarrassingly one-sided at this point.

This also comes on the heels of a recent poll that came out from (admittedly questionable) pollster Civiqs showing her support amongst Arizona Democrats bottoming out at an absurd 8% approval rate. Ohhh, dearest senior Senator, they are just not into you. Not at all.

So what does it mean for Sinema? These sorts of insider-baseball moves from political parties usually have no bearing on real life, but this one may be somewhat different. You see, party support of an incumbent matters. It means that behind the scenes, potential new entrants will be strongly dissuaded from entering the fray, in a methodology that Pablo Escobar made famous: “plata o plomo”, which translates to “silver or lead”. You take the bribe or you get the bullet. Those are your choices.

As it relates to politics, it’s not uncommon for party leadership to dissuade challenges to an incumbent by offering up party support for a different, lower political seat (silver), or subtly let it be known that if you choose to go forward, inconvenient truths will come out and be used to destroy you (lead). This is a significant tool in avoiding chaos and bloody battles against those who are already in power and on “the right side”.

The censure decision takes that away; there will be no keeping anyone from entering that fray. The protective walls have come down, and the buzz is already heightening for a run by Ruben Gallego for that seat (and when you hear this sort of buzz, it’s probably not accidental, it’s PR). Moreover, it frees up the party to actively consolidate behind and support a candidate. While Gallego has his detractors within the party apparatus for having a reputation for a hard-partying lifestyle, if the party chose to back him as the best shot to win in 2024, Sinema would have no chance in that primary.

And so Sinema will effectively have two choices: run without a party and hope that 35-40% will win in a three-way race, or move into the cushy, 7-figure world of DC lobbying. It certainly feels like she is moving towards the latter, and I don’t think anyone could blame her for choosing that golden road. Arizona Democrats certainly wouldn’t mind.