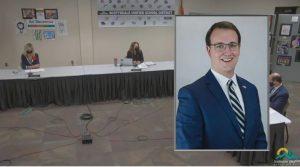 Last week we spoke about the unfolding Greenburg scandal and called for him to resign. The potential consequences have been compounding at a rapid pace since then however.

The SUSD board has since taken action, voting nearly unanimously to strip him of his title as Board President (Greenburg was the sole dissenting vote); he was then replaced for that role by Patty Beckman. While a vote to ask him to resign was on the meeting agenda for that same day, it did not come to fruition, although both Beckman and Board member Zach Lindsay publicly called for his resignation. Julie Cieniawski, the other board member who was also actively supported by the local Democratic party, is the only member who is actively campaigning against his ouster, stating that such a decision now would be hasty and rushed.

That is just the beginning of potential consequences however; SUSD Superintendent Scott Menzel announced that an independent forensic investigator was hired to further pursue this case, which may lead to even more damning evidence being uncovered. Republican candidates have smelled blood in the water and have jumped into the fray, with Kari Lake calling a press conference and including LD23 State Representative Josh Chaplik, whether they publicly called for his resignation. And State AG Mark Brnovich, a candidate with true investigatory teeth and a desire to mount a trophy on his mantle in the midst of a tough primary battle, has called for an investigation from the DOJ and FBI.

He could also be forced out of his seat by the voters. In a wrong-minded, petulant response to masks in schools, activist parents started a recall election against four Board members back in August; Greenburg was one of those to be subjected to the recall. While the efforts were highly unlikely to submit the necessary signatures by the December 18th deadline, they now have a clarion call to rally their efforts for Greenburg around.

Greenburg’s political days are numbered, and the only question is how long he wants to drag this out and how public he wants his embarrassment to be. For the sake of himself, his family, and most importantly the parents and kids in the district, we reiterate our call for his resignation. It will be best for everyone involved if he simply walks off quietly into the night and allows the district to heal without him.