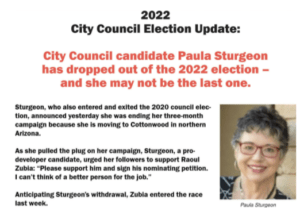 Strange as it may seem, 2022’s Election Day isn’t that far away, but the chess pieces are already moving for races ranging from the federal level to the local level. Scottsdale isn’t immune, with a rather important election right around the corner, and recently we got slightly more clarity.

Paula Sturgeon, previously a relatively high profile political newcomer and candidate for Scottsdale City Council, announced on Facebook that she is bowing out of the race. She credits falling in love and deciding to move to Cottonwood as the reason why. Assuming that this is not analogous to a politician stepping down to “spend more time with family” as a way of saving face before a significant shoe drops (and we have no reason to believe that), we wish the absolute best.

This is somewhat unfortunate in our opinion. Sturgeon had given some strong inclinations that we would be decidedly in the non-NIMBY crowd, something sorely needed in Scottsdale City Council in the face of the “Council of No”, the rejection of very good projects, and skyrocketing rents across the state and especially in Scottsdale. We have already spoken at length about this issue with the current Council makeup, but head here if you want a reminder.

That said, Sturgeon’s relative newcomer status to politics did lay itself bare at various points. She had successful involvement in the city’s bond elections as we spoke about here, which was not insignificant. However, she was often known for not shying away from open conflict, and was called out by local activists about unusually contentious and combative social media posts. Considering that she is a minister, there was palpable cognitive dissonance amongst many as they considered her candidacy.

Sturgeon did openly endorse a successor to her campaign mantle on her Facebook page; she recommended that her supporters instead support Raoul Zubia for the seat. Zubia at first glance has a strong list of local community involvement, which helps bolster his credibility. A look at his LinkedIn page shows a background in relatively low-level banking jobs with a current six year stint as a consultant with a San Francisco company; not much to glean from.

We can’t speak to the quality of his candidacy, but we will soon see. But we do hope that part of the reason for her endorsement is that he holds similar pro-business views. If that is the case, we may just find ourselves warming up to him as well.