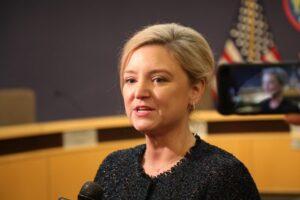 Last week we spoke about the DOJ investigating the Phoenix Police Department regarding potential malfeasance in the office, which resulted in a one-day suspension of Police Chief Jeri Williams. However one office that had a very significant role in many of the actions being investigated yet has mostly flown under the radar is Allister Adel and the Maricopa County Attorney’s Office. As more information comes out, it is becoming more apparent that they played a significant role in the attempted prosecution of protestors.

Perhaps the most potentially problematic part of this story was MCAO labeling protestors as a street gang, a label that the lead prosecutor of the case April Sponsel slapped onto the defendants during last year’s protests. A lack of communication between Sponsel and the top brass is being blamed, and Sponsel has since been dismissed from her role.

Sponsel is now filing a claim against MCAO, alleging that it wasn’t a communication breakdown at all, that eight high-ranking members of the department met to discuss the charges a day after the indictments were handed down.

The controversy stems from the fact that protestors were charged with being in a gang called ACAB (short for All Cops Are Bastards). While that is a popular clarion call and spray-painting tag for the more extremist members of protests around the country, there is no evidence that this is anything that could be considered a cohesive criminal gang. The same applies to “Antifa”, the group that has indeed caused significant trouble in various cities around the country, but by nature is decentralized without any widely understood power structure, and as such doesn’t fall into any traditional criminal gang definitions.

It is difficult to believe Adel’s explanation that their top brass didn’t know about the charges in such a potential bombshell of the case. If that’s the case, then there needs to be a very serious conversation about a lack of controls and oversight in such an important office. Instead, it certainly seems as though Sponsel was made a scapegoat after the media firestorm kicked up.

Also mentioned at length was MCAO’s supposed reliance on testimony from Phoenix PD in bringing the charges. While county prosecutors and police departments regularly work hand-in-hand and must maintain a strong relationship, it’s hard to believe that these charges passed any sort of reasonable “smell test”. Considering that the arrests and charges were in October and at the tail end of Adel’s campaign to continue to lead MCAO, the optics of it are that it was an “October Surprise”, more designed to sway votes than deliver justice.

No matter which way this situation is looked at, it does not appear to be becoming of the demeanor necessary to effectively govern in such a critical role. We sincerely hope that going forward, transparency and the prudent application of justice no longer needs to be forced at MCAO.