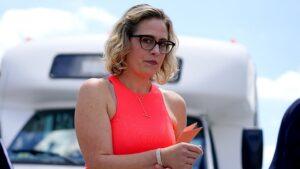 It should be no surprise to anyone who follows American politics that Arizona’s technically-Democrat Senator Kyrsten Sinema has made some enemies, many of them left-of-center. Her dedication to her independent, “mavericky” branding has been something that has vaulted her to national prominence, but sometimes with the love and adoration of a wrestling heel.

The progressive left has long been critical of her opposition to larger minimum wages and her obstinance regarding eliminating the filibuster. Those are subjects that are a benefit to many in the center and the right, but are things that while they may annoy mainstream Democrats, wouldn’t represent a tipping point in their tenuous support of her.

In a simultaneously shocking and unshocking development, the Arizona Democratic Party held a vote at their regularly scheduled State Committee meeting last weekend, and with OVER 80 PERCENT of the vote, gave her a vote of no confidence. While these sorts of votes are not too uncommon in politics (John McCain faced at least one), to have such a one-sided vote to condemn a sitting Senator from your own party is…something.

And let’s be clear: Kyrsten Sinema doesn’t care. She routinely has distanced herself from the party, and seems to believe their support to be somewhat toxic. But at the same time, if you want to win a primary, it’s usually not wise to tick off all of the party members. It’s tough to win a primary when 80% of your most energized voters don’t like you.

So where does she go from here? Her re-election is still 3 years away, and a lot can happen. But at this point, any halfway competent primary challenger with a good digital game could raise 7-figures in a national campaign just by virtue of running to unseat her; she is that hated amongst the progressive left nationally. Outside of putting “sham candidates” on the ballot to dilute opposition vote, what is her best option going forward?

After all, I have to believe that she would have a better chance winning a plurality of Arizona voters in a tight 3-way race, then trying to get over 50% in a primary with an electorate that really, really doesn’t like her.  She has routinely made it clear that she doesn’t need or want the party; this would be the final step in her metamorphosis, and would allow Dems to move on to someone they don’t hate.