There’s a helpful rule in political and legal circles:  know the answer to the question before you ask it.

Rarely has it been violated more spectacularly than last night, in Scottsdale.  For a redevelopment project called 92 Ironwood that in most any other time would be on a consent agenda.  As a reminder the plan seeks to replace an empty and dilapidated office complex, next door to a shopping center, with a low-density, low-height multi-family project.  It is being proposed and would be financed and managed by highly regarded Scottsdale companies.  No thinking person who walks the site and its deterioration and emptiness can think 92 Ironwood is misguided.  Indeed, it is necessary to help a critical hospital and beloved shopping center in the Age of Amazon.  Some apartment projects deserve opposition.  Not this one. 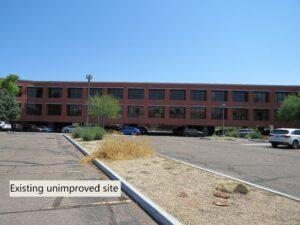 Nevertheless, the case has become very weird as Scottsdale politics can cause these days.  All those immediately surrounding the project from Honor Health and a shopping center, including its small businesses, support the plan.  There are no residents within any proximity.  Yet, Scottsdale’s Lockdown Caucus which opposes anything at anywhere at any time – roughly 17% of the electorate – has weighed in to strangely oppose the plan.

So last night there was an Open House.  It was terrifically attended and ended up being a convention of Scottsdale’s best characters in democracy from Kathy and Bob Littlefield, Linda Milhaven, Tammy Caputi, Tom Durham and Solange Whitehead to Bob Pejman, Jason Alexander, Rod Pritchard, Don Henninger, Andrea Alley and many others.

Early on and perhaps inspired by the robust turnout a member of the Lockdown Caucus rudely interrupted the presentation – before the illuminating walking tours – and loudly challenged the developer before the audience:  did anyone there support what would be a $95 million investment in Scottsdale and revitalization a defunct slice of it?  He thought he had the audience due to its size on his side.  Boy was he wrong.  He was he literally shouted down by 92 Ironwood supporters.  Whatever political balloon he thought he was holding deflated quickly, badly, embarrassingly.

That’s because of the 80 people who attended the Open House 58 signed into support 92 Ironwood, 12  were opposed (at least as of then) and 10  said they were undecided.

That’s reality, and quite a reversal from the perception that 92 Ironwood was an uninvited redevelopment.  The opposite is now true, thanks to a political faux paus and paperwork for all decision makers to now see, in the case that all of the neighbors before and even the Arizona Nurse’s Association weren’t persuasive enough before.