(SCOTTSDALE) — As wildfires sweep through parts of Arizona, including the Tonto National Forest and Cave Creek north of Phoenix, the Southwest Wildlife Conservation Center is getting ready for an influx of injured, displaced, and orphaned wild animals.

“SWCC has seen a large increase in orphaned and displaced animals this spring. Animals that have not perished in the fires have lost their habitats causing them to move long distances and crossing highways to find new homes. They are forced into areas that are unfamiliar to them. They do not know where to find food and water,” said Linda Searles, founder and executive director of the Southwest Wildlife Conservation Center.

The Scottsdale wildlife center has already welcomed a coyote puppy displaced by a fire in the Cave Creek area,

“He is doing fine. He has sore paws and was very dehydrated but is doing well now,” Searles said. 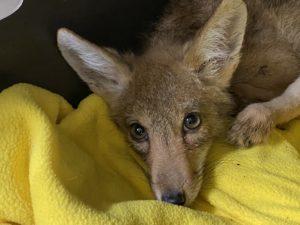 Searles said after fires are contained her Scottsdale center’s staff will go to impacted areas to check for animals in distress.

“After they clear the area, they will let us go back in to check for animals that were left behind,” Searles said.

She expects to see an influx of more animals impacted by the fires which have burned north of Phoenix in the Cave Creek area as well as the 186,000-acre ‘Bush Fire’ in the Tonto National Forest.

The Southwest Wildlife Conservation Center also works with fire fighters and other emergency personnel who rescue orphaned, injured, and displaced by wildfires. 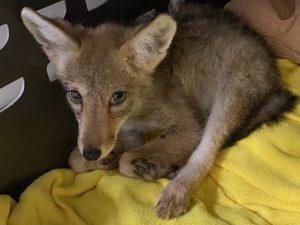 The non-profit wildlife sanctuary is located near 156th Street and Rio Verde Drive in Scottsdale. Throughout the year, Southwest Wildlife rescues and rehabilitates dozens of native wild animals always with the goal to release the animals back into the wild, whenever possible.

Southwest Wildlife operates solely from the public’s support and relies on donations and grants to keep the facility open with trained volunteers and veterinarians caring for the animals 24/7.

To make a donation or for more information on how you can sponsor an animal please visit https://www.southwestwildlife.org/donate/donate/donate.html. The nonprofit Scottsdale animal refuge has listed preferred donations on a wish list on its website and an Amazon wish list. That list includes enrichment toys for the animals as well as other items SWCC needs.

Established in 1994, the SWCC rescues and rehabilitates wildlife that has been injured, displaced, and orphaned. Once rehabilitated, they are returned to the wild. Sanctuary is provided to animals that cannot be released back to the wild. SWCC also offers educational programs and opportunities in the field of conservation medicine. Wildlife education includes advice on living with wildlife and the importance of native wildlife to healthy ecosystems.  For more information or to donate go to https://www.southwestwildlife.org/.