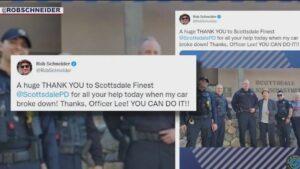 Scottsdale police are not immune from celebrity sightings; history is filled with quite a few examples of various celebrities (mainly professional athletes) who have too many drinks, get behind a wheel and quickly learn that driving under the influence isn’t acceptable in Arizona, regardless of how big your paychecks are. SPD recently had a more congenial celebrity encounter however, with a tie-in to local politics.

Comedian Rob Schneider, best known for his time on Saturday Night Live as well as comedies such as Deuce Bigalow, calls Scottsdale his home. Recently his Tesla broke down on our roadways, and who came to the rescue? Scottsdale’s finest, as demonstrated via Schnider’s Twitter account.

Scneider isn’t alone when it comes to celebrities calling Scottsdale or Paradise Valley their home. Former star athletes Charles Barkley and Kurt Warner have kept a Scottsdale zip code even after their playing days were over. We all know about Alice Cooper being a local, but so is pop star Alicia Keys, Franie Muniz from Malcolm in the Middle fame, as well as another former SNL-turned-movie star, David Spade.

Scneider also made some local waves for a completely different reason only a few days later. At the end of a comedy show that he headlined, he went on to endorse Kari Lake’s campaign for governor. Schneider has not been known as a political firebrand, and has demonstrated views from across the political spectrum. A former Democrat who tired of liberal policies in California, his views became more pronounced in the midst of Covid-19, where he stridently voiced anti-vaccination views.

We recognize the everyday bravery of Scottsdale police, who deal with difficult situations every day, even if helping a broken-down celebrity is a much more benign problem to solve. And we also recognize the bravery of a celebrity making a public endorsement, one that will no doubt cost him some fans and friends. Regardless of how you feel about Lake, it’s a gutsy move.