Scottsdale’s repeat offending pet owner and candidate for City Council Michael Auerbach may have a dog that gets around but his Twitter account doesn’t seem to be going anywhere. 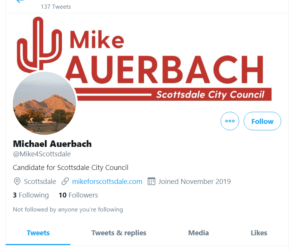 It has a whopping ten followers, despite the fact the account has been around since November 2019.

His Twitter troubles are the least of his political challenges.

In 2018, an Injunction Against Harassment was filed against Auerbach by a woman who claimed Auerbach verbally confronted her and later trespassed on the grounds of her apartment complex as Auerbach was walking his dog. No criminal charges were ever filed in connection with that incident.  Auerbach was cited for a leash law violation in 2018 and he paid a fine. It happened again in late 2019 when he was cited for having a dog at large in a park.  He pled guilty and paid a fine according to court records.

He remarkably remains the weirdest Scottsdale City Council candidate in 2020. 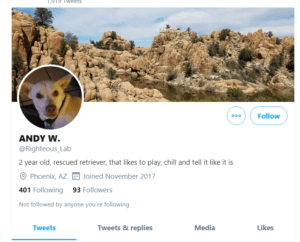