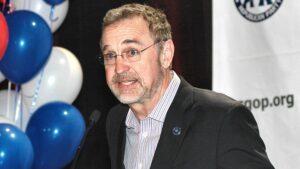 Rarely in modern history have a career’s worth of hopes and dreams been dashed by two syllables. In fact, only one other example comes to mind, in the form of Howard Dean’s “HEEEEE-AHHHHH” screech after getting destroyed in a Presidential primary in ‘04. Two syllables made Jeb Bush a sad meme, a man with all the natural advantages in the world yet a pathetic level of enthusiasm and support. Two syllables with the singular power of destroying a political career and nailing the coffin. Two syllables to show the world that what looks great on paper can turn into a CV written with invisible ink.

While Matt Salmon hasn’t yet uttered a two syllable death rattle, It’s hard not to see the comparison.

On paper, Salmon has all the conservative bonafides in the world. He has a long track record in both the Arizona legislature as well as the US Congress, a stalwart conservative that entire time. He was the former chair of the Arizona Republican Party. He handed his Congressional seat over to Andy Biggs, a conservative darling. He came close to becoming the Governor of Arizona previously.

Jeb Bush looked great on paper, but ended up getting trounced by a former Democrat who knew how to rile up crowds and demonize his enemies. Much like Richard Nixon visibly sweating in the first ever televised Presidential debate against an opponent who understood the modern media landscape better, Jeb wasn’t ready for the brave new world of New Media. He didn’t understand how to capture the media’s imagination and get that much heralded “earned media”. Except when he was embarrassing, that is.

In politics, time dilates: what you did a decade ago might as well have been 50 years ago. In fact, that experience can sometimes be a detriment, as it could lend itself to a proclivity to lean on what worked in previous campaigns, and not embrace what is working now. Political methods adjust at the speed of technology, after all.

A friend of mine had him as a professor, and said that he was very reasonable, professorial, and would easily talk from a liberal perspective in order to give his students a well-rounded view on various topics. She had very good things to say about him in that capacity. And Jeb Bush could explain subjects in a very intellectual, high-minded way that suited him well for a classroom. And he got destroyed by a bombastic candidate with a questionable track record but who thrived in front of a camera.

It feels like we’re witnessing the slow motion train wreck before a problem is even spotted on the tracks.