Working in government these days can be difficult, whether it’s in Washington, D.C. or closer to home in Arizona.

It seems there is a scandal a day seeking to besmirch decent, public servants – all because of political games or, in this world we now live in, where one mistake is treated as a kiss of death.

Fortunately, there is an exception to that increasing rule. 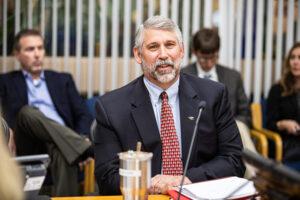 For 22 years Andrew Miller has served as Paradise Valley’s Town Attorney.  That’s a position held by some notable people over the years including a certain U.S Supreme Court Chief Justice named William Rehnquist.

According to a recent article in the Paradise Valley Independent Miller has indicated he will be stepping down after two plus decades of service.

While a loss for the Town, it is an opportunity to say job well done.

Paradise Valley is not the easiest place to work.  The Mayor and Councilmembers are nearly always strong willed and independently accomplished.  So is the electorate.  Interests before the town often have the best lawyers representing them.  And, by its nature, being a municipal attorney is a tough job.  Like an umpire you have to call balls and strikes.  And that usually upsets the people at bat in one way or another.  So to serve 22 years as Miller has is an achievement unto itself.

But so has been his professionalism.  He’s a tough but thoughtful lawyer for his client, Paradise Valley.  People know that going in and respect it coming out.  Miller has helped navigate some of the most notable and complicated developments and redevelopments in the Valley, including Mountain Shadows and the pending Ritz-Carlton.  He calls on outside counsel when he should but isn’t afraid to make the difficult calls himself when he must.

Miller said he doesn’t know what’s next for his career but when he looks back on his time in Paradise Valley he, and all others, will be able to say well done, this good and faithful public servant.