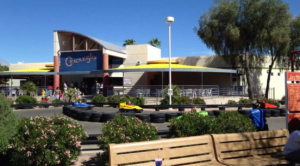 Scottsdale as a haven for technology and innovation? It’s not as far-fetched as it might sound to some, but that is also dependent on the City Council’s ability to green light outside-the-box developments.

Perhaps you’ve seen or been to the CrackerJax amusement park, which featured mini golf, go-karts and batting cages in a complex on Scottsdale Road just south of the 101. Owned by the well-known Herbinger family for 28 years, they recently announced that they have come to terms to sell it to George Kurtz, the billionaire founder of the CrowdStrike security company.

As for what Kurtz plans to do with it, the idea is an intriguing one: he states that he intends to “create a transformational, sustainable mixed-use campus as a catalyst to attract top innovators, technology entrepreneurs, knowledge workers, and venture capitalists to accelerate Scottsdale’s growing technology cluster.” Turning an amusement park into a space for tech incubation…to call it visionary seems to be almost downplaying the far-fetchedness of the idea.

Granted, we have heard this story before, the promises of Scottsdale becoming a tech haven. Over a decade ago it was widely touted, and while it’s safe to say that Scottsdale is not entirely dependent on golf and tourism to power its economy, no one would ever confuse it with the next Silicon Valley, but any attempts to bring high paying jobs and solid talent here can’t be hated on.

That said, we have talked at length about the current City Council and their reticence to pro-growth policies. Are they potentially a roadblock in this process? The biggest question is whether or not there would be any change of the zoning categories, which often demands further hoops to jump through and often makes the process more difficult to navigate. We are not zoning attorneys, so understanding what that process looks like going from an amusement park to a mixed use business park is above our paygrade. Certainly with the current makeup of the Council, nothing is a given.

That said, it certainly seems like a great idea from someone with a history of strong execution. We can only hope that the current Council sees it as such and facilitates its passage, as we could use more outside-the-box thinking in this city.