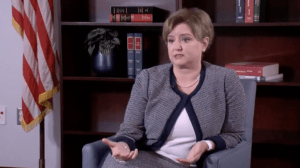 After a very tumultuous past 6 months, including treatment for alcohol abuse, staff resignations, public calls to resign and numerous reports of significant issues within the department, now-former Maricopa County Attorney Allister Adel resigned from her office last week. The ink had barely dried from the resignation statement before the race to succeed her started to materialize however.

Since Adel resigned before the petition signature deadline for candidates (the date for which candidate for public office are required to turn in petition signatures in order to get onto the ballot), her more immediate successor will be appointed through the rest of the year, and will be replaced by the winner of a special primary and general election in 2022, who will serve a two year term before the normal-year election. The deadline for filing those signatures is April 4th, and the requirement is over 4,000 for Democratic candidates and over 4,500 for Republican candidates, meaning that it is essentially a two-week, all-hands-on-deck sprint.

The Democratic side cleared out nearly immediately as Julie Gunnigle, who faced off against Adel in the 2020 race, nearly immediately announced her intention to jump into the race. Gunnigle, who is a fan favorite amongst a large portion of the local Democratic community, cannon-balled into the race in an incredible manner; within 24 hours of her announcement, she had already received over the minimum amount of signatures to qualify, all electronically signed (meaning that they are pre-verified as legitimate). With that move, she has almost certainly cleared the Democratic primary field for herself and will be uncontested.

On the Republican side, we will very likely have a contested primary however. First out of the gates was the former general counsel for Governor Ducey, Anni Foster, who announced her sympathies and best wishes for Adel on Twitter in her announcement that she would be running to succeed her. As both counsel for the 9th floor as well as Assistant Attorney General, she is clearly knowledgeable about the legal wing of governance, and having the support of Ducey means that fundraising will likely be healthy.

So far, the chatter seems to imply that the GOP primary will be a two person race between Anni Foster and Gina Godbehere, a prosecutor for the city of Goodyear with a very strong resume and even though it is said that she has a strong moderate streak, also maintains strong support within the GOP community. One other entrant that is intriguing however is Rachel Mitchell, who worked directly under Adel at the MCAO and actually pushed her to resign. She has worked in nearly every part of the office and knows it better than anyone else running. But as we all know, ability does not necessarily mean electability.

It will be interesting to see unfold, but all of these announcements will be moot unless the candidates can get enough signatures by next Monday. And for now, at least as it pertains to that first hurdle, it’s Advantage Gunnigle.