(PHOENIX) – Americano! – a record-setting musical production based on the life of a DREAMer – has reached out to the incoming Biden Administration via a letter sent December 2, 2020 to propose a special performance at The White House.
It would help celebrate President-Elect Joe Biden’s pending reversal of President Donald Trump’s policies and follow in the footsteps of productions like Hamilton which performed for the Obama Administration.

During his first 100 days in office, President-Elect Biden has pledged to rescind President Trump’s 2017 Executive Order that sought to end the DACA program. Biden’s administration also plans to produce legislation that would provide a pathway to citizenship for over 1 million DREAMers. 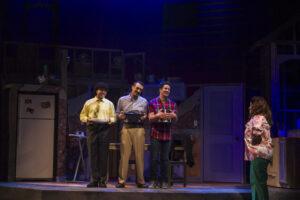 In June, the U.S. Supreme Court decided on a temporary reprieve on the Deferred Action for Childhood Arrivals (DACA) program with a solution ultimately being required by Congress.

Americano! is the true-life story of Antonio Valdovinos who learned of his DREAMer status on his 18th birthday when he tried to enlist in the U.S. Marines after graduating from Camelback High School in Phoenix.
Americano! completed its record setting 27-show run earlier this year on February 23rd at The Phoenix Theatre Company, breaking all-time for an original musical production. Besides the box office record, 9,048 people saw Americano! with a string of 10 sold-out performances.
The production has also garnered positive reviews from both sides of the political aisle.

Tony Award-winning producer Ken Davenport is Americano!’s Executive Producer. Davenport has produced 20 Broadway shows. He won Tony Awards for Kinky Boots and Once on This Island.

“We have an important story to tell about DREAMers. Americano! has an uplifting and positive message that resonates with these times and all times,” said Valdovinos. We can think of no better way to celebrate the reversal of Trump’s immigration policies than with a visit with the Biden administration.”

Please see the letter from Valdovinos to President-Elect Biden:
December 2, 2020

My name is Antonio Valdovinos – and I’m a DREAMer. Immigration and the fate of nearly 1 million DREAMers like me are paramount issues for our country.

I learned of my status on my 18th birthday when I tried to enlist in the U.S. Marines. I wanted to serve my country after the events of 9/11.
My story and my love for our country are the basis of a new musical, Americano!, that set box office records at The Phoenix Theatre during its 100th Anniversary run earlier this year. We have an uplifting and positive message that we would like to share with you and potentially the First Lady.

We know it will likely be up to you and Congress to address the future of DREAMers and immigration as your administration seeks to rescind the 2017 Executive Order to end DACA and provide a pathway to citizenship. We can think of no better way to celebrate your reversal of Trump’s immigration policies than with a special performance by members of our cast.
Indeed, we would love to present a portion of the show to you at the White House as other productions have performed for other presidents, including Hamilton. We are happy to work with any schedule that works best for you and we will make every effort to accommodate. Ours is a production that is proud to have the first Latina composer of a major American musical and a cast that was 90% Latino.

Thank you for your time and consideration. Please contact me at valdovinostonyy@gmail.com or 602-300-5308 if you have any questions or to arrange a special Presidential performance.