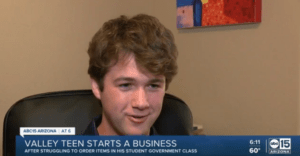 The culture of an area can be absolutely critical to its development; some areas are dependent on government to attempt to create solutions, and some areas foster innovation and in the process create budding leaders. One young man in the Valley is demonstrating precisely why the second option is the preferable one by far, and so we just had to share this story..

Check out this story about Cooper Weissman, a 17 year old who is running two businesses which he started himself; he has been creating and running his own businesses since eighth grade. One of them is a logistics company and the other a blockchain company. He has even hired a few of his classmates as interns.

In a world of instant gratification, where many of his classmates are no doubt hoping to have a career as an influencer and adding absolutely no societal value as a result, Cooper understands the long game, about building skill sets and knowing that not everything will be easy. Those are the sorts of traits that are needed to succeed in this world, not the ability to do a cute dance and use the right hashtags in an attempt to get attention.

But more than that, we look at this story as a reason to be thankful that we live in a country like the United States and a state that looks kindly to innovation like Arizona. Many countries are so steeped in bureaucracy that simply the process of starting your own business is such an onerous pain that it is more lucrative to simply get a government job and coast through your career.

So any time you read a story about red tape harming businesses, or socialism harming the entrepreneurial spirit, perhaps you should keep Cooper in mind. It is helpful to know that the best intentions of capitalism can still be found, and that as much as you may feel inclined to rant about “kids these days”, great examples of what’s possible will continue to shine.