PHOENIX (February 17, 2022) – ¡Americano!, a contemporary musical telling the true story of an Arizona Dreamer and his inspiring fight for societal- and self-acceptance, will make history in March as the first Arizona-birthed musical to open Off-Broadway in New York.

Chicanos Por La Causa (CPLC), a Latino nonprofit community development organization headquartered in Arizona, is helping to produce the play, which tells the true story of Phoenix resident and Dreamer Tony Valdovinos. Indeed, without CPLC’s major investment, the show’s run in New York would not be possible.

¡Americano! will open in New York City beginning with its first preview on March 31st at New World Stages, next to Jersey Boys. The official Opening Night will be Thursday, April 21st. The musical is currently scheduled for a limited 12-week run through June 19.

Inspired to join the Marines after the 9/11 attacks, Valdovinos, a graduate of Phoenix’s Camelback High School, tried to enlist on his 18th birthday, only to find out a secret his parents never told him: He is a ‘Dreamer’ – an undocumented immigrant brought to The United States from Colima, Mexico when he was just two years old. 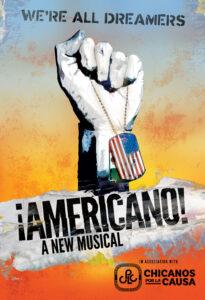 Due to his immigration status, his enlistment was denied. His dream might have been crushed, but Valdovinos never accepted defeat. He helped inspire a political awakening among Arizona’s rising and young Latino electorate, playing a leading role in electing a Marine to U.S. Congress.

With a unique sound by Ameri-Chicana singer-songwriter Carrie Rodriguez and exuberant choreography by Sergio Mejia, ¡Americano! set box office records for an original musical during its four-week run during The Phoenix Theatre Company’s 100th anniversary season early in 2020, concluding with 10 straight sell-out shows.

The road to New York began in September 2021 when the production’s Tony Award-winning Executive Consultant Ken Davenport learned that the Shubert Organization, one of the world’s most prominent theatre owners and producers, was offering the show a spot next to Jersey Boys in Spring 2022.

Believing ¡Americano! a quintessentially American story that deserves the global exposure and amplification of a New York stage, the show’s Lead Producer, Conceiver and Valley resident Jason Rose, mobilized numerous business and political leaders in Arizona and New York to invest in the show.

A landmark partnership was forged with Chicanos Por La Causa (CPLC), a social justice organization founded in 1969 to confront the oppression facing Latinos in Phoenix as part of the civil rights movement led by Cesar Chavez. CPLC became the show’s leading investor, a strategic decision rooted on the opportunity to bring the story of Dreamers to new audiences and encourage them to take action to bring about long-overdue policy change.

In recent years, CPLC has countered the heightened anti-immigrant rhetoric in Arizona by helping Dreamers pay for their college education after a voter-approved proposition blocked their access to in-state tuition and covering the cost of their DACA applications. In addition, CPLC has advocated in boardrooms, courtrooms, public forums, newsrooms, and alongside local and national strategic partners to seek a legislative solution for Dreamers, who are viewed as assets across the political spectrum and by business leaders alike yet are still denied basic citizen rights and protections.

“CPLC’s investment in ¡Americano! is an extension of that mission for empowered lives,” said David Adame, President and CEO of CPLC, which has programs and operations in Arizona, Nevada, New Mexico, Texas and California.

“We were drawn to the ethic of this show, the promise of it having already succeeded before 10,000 people in Phoenix and the national statement we can help make for our communities, our state and this history making piece of Arizona art that features a cast that is 95% Latino,” Adame said.

He also noted Arizona’s November vote to re-establish in-state tuition for Dreamers such as Valdovinos was important to the group’s investment. CPLC and its sister advocacy group, CPLC Action Fund, are supporting passage of the ballot measure.

If the play is proof of anything, it’s that the dream for all Dreamers is within reach. “How crazy is life?” asked Valdovinos. “Think about getting a call out of the blue to do a musical on your life and then several years later there will be billboards in Times Square promoting your premiere there?”

¡Americano! will occupy one of New York City’s three 499-seat theaters, only one seat shy of the 500 seats that define a Broadway theater.

“I have been working my whole life towards this moment. Now it’s here,” said Michael Barnard, the long-time Artistic Director of The Phoenix Theatre Company who also is the show’s Director and Co-Author along with Jonathan Rosenberg and Fernanda Santos.

“I can’t believe what started out with a chance conversation with Jason Rose in April 2015 at a wedding has now led us with so many twists and turns to a dream, about a Dreamer, about to come true in New York City.  I couldn’t be prouder of our team and our state,” Barnard said.

The ride for Rodriguez has been no less wild.  She was tapped for ¡Americano! despite never having written a musical.  Barnard said her fresh eyes and passion for the story are what enable the show’s unique sound.

“I have never worked harder on something in my professional life.  The show was beautiful and powerful in Phoenix.  It’s only become more so since,” Rodriguez said, adding it was one of the great honors of her life to bring to life one of the most important stories of our time.

Tickets to the general public went on sale February 17th and can be purchased here. The first performance of ¡Americano! will be March 31st, coincidently on civil rights activist Cesar Chavez birthday which is observed by CPLC as a day of service.  Its official Opening Night will be April 21st.

Those interested in learning more about ¡Americano! can do so by visiting AmericanoTheMusical.com. Those curious about the sound of the show can do so by listening to the ¡Americano! Concept Album, produced by its Orchestrator & Arranger Sergio Mendoza, here. Mendoza is a native of Nogales, a border town in Arizona and a member of the Grammy Award-winning band Calexico.

New York City-based Jonathan Ivie serves as Musical Director & Vocal Arranger. Scenic design is by Robert Andrew Kovach; costume design is by Adriana Diaz; lighting design is by Jamie Roderick; sound design is by Kevin Heard; and hair & make-up design is by Krystal Balleza. Advertising & Marketing is by The Pekoe Group, Casting is by Michael Cassara, CSA, and General Management is by Visceral Entertainment.